Or…maybe not. Not everything we humans try is a success.  This is just a truth.  But it’s the one that got away – the experiment that flopped –  that fascinates me most. So I am likely to keep trying.

Gardens of lettuce and spinach are growing inside at our house!  That’s the good news.  But this tub (above) was started about 2 months ago.

This about one month ago… 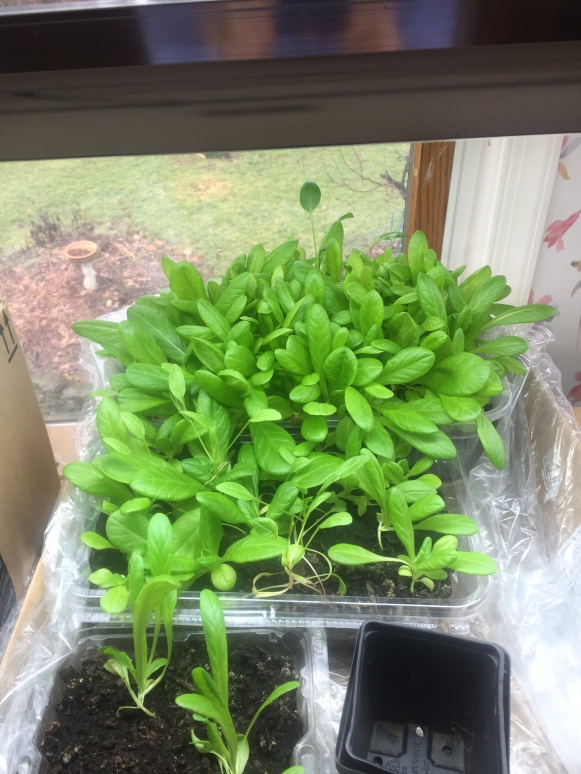 This one 2 weeks ago… 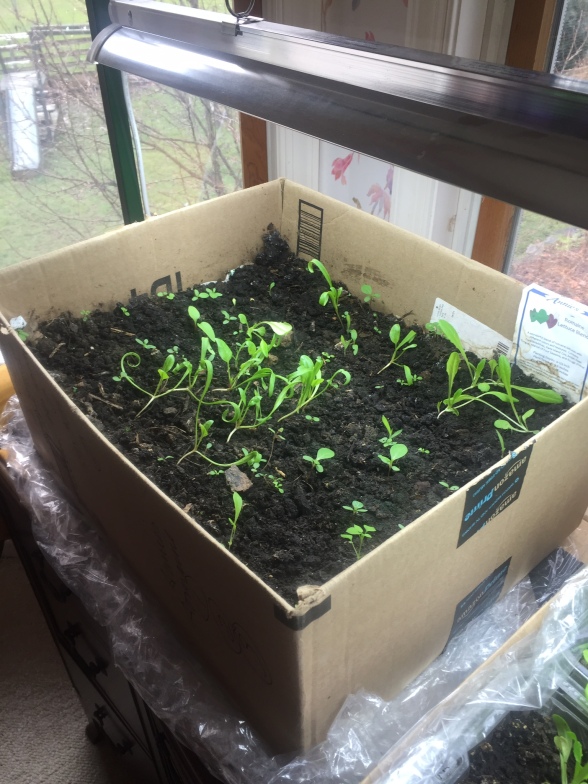 At this rate we’d get to eat a couple of salad per winter.  Shucks! – it seemed like  such a great plan.

Edward and I embarked on “Banting” – a South African diet that focuses on veggies first and mainly, fat second, meat next, cheese only if you can do it, then very little fruit. No grains, no flours, so no bread, pasta, etc.  The recipes in the cookbook look and taste delicious, focusing on high fat (butter, olive oil, bacon), moderate proteins, lots of vegetables, and very, very low carb.  The Banting Diet says good fats silence those incessant sugar cravings.  Sugar, even natural forms of it, confuses your appestat, the part of the brain that tells you when you’re full – so eating carbs makes a person (especially some people) constantly hungry.  Edward has found it very helpful – removing the carbohydrates from his diet has ended the sugar cravings that dominated his taste experiences before.  He has begun (after some tweaking) to drop weight.  He says he plans to eat this way from now on.

Given that every day starts with greens cooked in butter and eggs, we thought if we could grow our own in the window this winter, wouldn’t we be clever?

I met a friend in the grocery store last night, and over a box spinach from California and a handful of laocinta kale, I confided our growing woes.  Her husband is also a grower and an innovator.  They have red wiggler worms in their kitchen, which in my opinion makes them hard core.

She responded with a smile that confided both sympathy to me and also perhaps long-suffering patience, “There’s a reason we buy this stuff.”

True enough.  But the Steve Ritz in me (last post) wants to know why? Why didn’t the spinach grow faster?  Soil not deep enough?  Soil not rich enough?  Not enough water? Not enough light?  Edward says he doubts the plants can be fooled by the grow lamp, nor the plate warmer I jerry-rigged under them.  That winter sun is just too pitiful and too low on the horizon to help out, and they know it.

But every day – there is a little more sunlight.  (There must be a way…)

Meanwhile…we still have eggs!  And chickens old and new have been enjoying spreading straw and stirring up the earth in garden beds to come…

Authors, seeking publication of their book Embracing Chaos, The Whale was Just the Beginning of the Story View more posts

2 thoughts on “Forget It California – We Got This!”