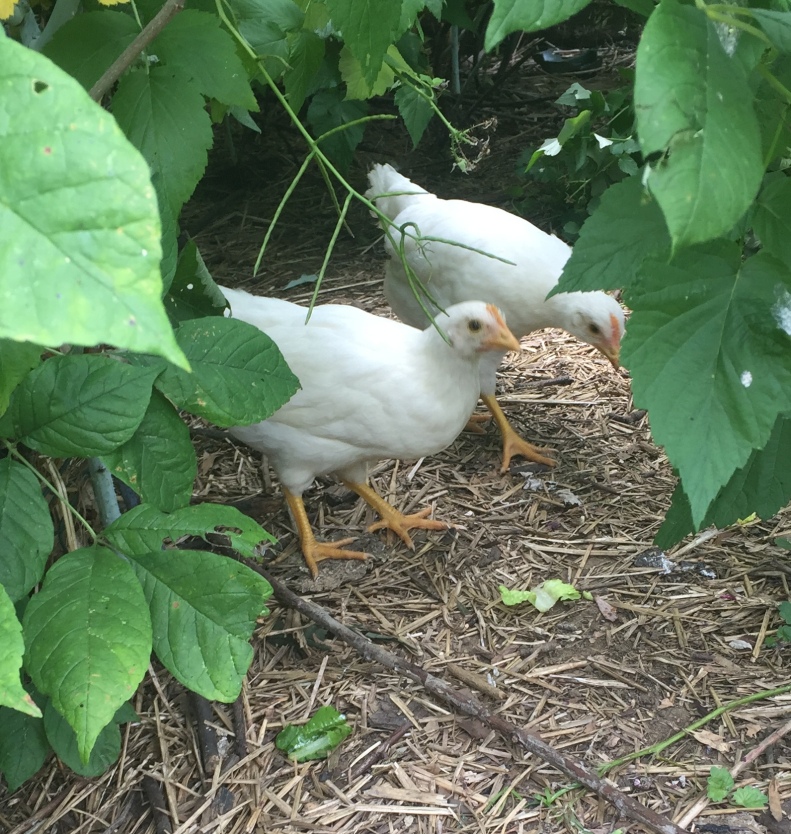 My friend and I went out to lunch yesterday and compared experiences with our young not-quite-adult children. Our youngest sons are both high school graduates this year. We mourned children who were communicative as young ones, and now necessarily shutting mom out in their effort to become independent. We held hands across the table and almost cried over our sense of loss — almost, but we didn’t. Because this process is entirely as it should be. If the kids didn’t do it,  we know we would be worried. Still, having kids home from school for the summer can be enough to drive any loving mom crazy. It could be worse though, I said to my son at supper. You could have a chicken for a mom.

A little puff on the celebratory graduation cigar

Yesterday mama hen must have woke up and decided she WASN’T a mom any more. All day long we watched as the little flock of five juniors straggled around the back yard without her. And to make the new status really clear, (to them? to herself perhaps?), by the end of the day she began pecking their heads when they were trying to eat. I couldn’t take it – I shooed her away. I imagined pecking my recent high school graduate’s head to clarify our new relationship. The mama hen looked a bit confused, as well. She shook her feathers when I told her to shoo, and she didn’t come into the run again until very late. After weeks of worrying and foraging for six, her job was done, and she was a solo bird again.

I am fascinated to see what today brings, since phase two will have to be that each hen figures out where she comes in the flock pecking order. (Where did they all sleep last night? I forgot to check.) One of the bolder little pullets (a young not-yet-laying hen) already forages with the big girls. But the tail-ender of the group doesn’t seem ready for this new stage of things, and was too scared yesterday to even come out from under the coop and into the back yard with her nest-mates. She kept running up to the gate in the fence, and then back under, “panic peeping,” trying to work up the courage to face the world without mom to hide under. Life, as Glennon Doyle Merton writes, is brutiful. (That’s brutal and beautiful.) True enough.

Meanwhile, having two of my human fledglings home is working out great so far  – lots of yard work and house projects are getting done. I am enjoying the extra bodies around the house and the conversations at dinner. My daughter has us watching Game of Thrones. No writing is getting done, but that seems to be my way. When the sun is out, I want to be out there too.

It’s true that we are paying them for this work (Susan says that’s cheating) but family rates! I told her that I realized I could do this since I saw my neighbor doing it. Since we are still supporting them it all makes a cycle anyway – if they work and we pay them rather than hiring other help, and then have them buy more of their own stuff. (Does that count as pecking heads?) Win-win.

Maybe the mother hen is wiser than I. She knows how to let go, while I cling. In fact, I am a bit more like that tail-ender chick, running back under the coop, peeping for the past rather than run through that gate into the wider world. But the chick can’t go back into the egg. I have only to try advising my young adults to realize that a doink on their heads would be about as effective as any maternal advice on money or jobs – or probably any other subject. They just have to get out here and scratch for themselves.

This morning the black raspberry harvest starts. As I head out into the yard to pick before today’s rain threatens mold to destroy the berries, I am grateful for cycles of life and transitions — and I find I am admiring the bravery of chickens.