Snubby the Chicken gives me a Look

Sunday night I sat rocking a chicken on the swinging bench after a busy day and a busy week, feeling guilty. Edward had found her squatting on the run floor that morning, and when we came to remove her from the rest of the flock that night it was obvious that she was on her way out. So I just sat on the swinging bench and looked at the beautiful gardens and the evening sky and rocked her and thought about her life. Then I set her still wrapped in an old towel into the earth, to give her body to improve the soil and nourish a tree.

This chicken had the kind of life that makes a vegan and vegetarians cry.  She was no real breed – a “sex-link” created for high productivity. Her face had been snipped when she was a chick, so she has a funny snubby thing instead of a beak. This meant she was at a disadvantage for keeping herself groomed for vermin, and for pecking up bugs out of the soil. Chickens are de-beaked regularly as a way of stopping them from pecking (injuring, killing) each other when great numbers are confined together. When I bought this batch of young hens from the local Feed Store I was shocked. This happens all the time, but we humans never see it. I complained to the store manager, and of course she never sells any of those now – but there are chickens being snipped every day of the week, and sold somewhere else.

Further trauma was in store for Snubby and the others in her group of six as they adapted to their new home and tried to find their places in the pecking order with my other hens. Then during July and August raccoons found a way into our chicken run, killing chickens night after night before Edward, assisted by Trumbull the dog, discovered their sneaky access point.  (Trum is still always on the lookout, every night…hoping…)

For a while then Snubby the chicken had relative peace. New young hens were added to the flock, and acclimated. She got lice (probably) and got dusted with the flock to relieve her of them. But when she got the yeast imbalance “vent gleet” this winter as most of the flock did, when everybody else overcame the yeast overgrowth, she never did. Her butt was all dirty feathers. She looked more and more poorly lately, and I wasn’t sure what it meant – but I was too busy with spring garden prep, and spring’s craziness to do more than worry and feed and pasture her well. And that wasn’t enough. She lived just one year.

For animals (or humans) to have good resistance to disease, they have to be bred for that. So much of who gets what is in the genes of any animal system, and there is plenty of sloppy breeding, or breeding for productivity, fast over every other trait. But still plenty is in the feeding, and the animal’s life. Stress is a huge factor. The nutrition to useless carbs ratio in their food. Exercise.  Animals will be healthiest eating a diet as close to what they would eat in nature as possible, and having the opportunity to scratch, or wallow or run depending on what their species loves to do. I am sure these words will sound foolish to some. However, if you are eating animals, or eating and drinking what animals generate, the food can only be as good as the level of care those animals receive. Think about that.

Do you eat eggs? Do you eat chicken? Hamburgers?  Most of the animal products you find come from creatures that have been raised in unnatural or cruel situations, in cages, away from the sun, unable to scratch and peck, unable to stretch out, unable to forage in the grass or wallow in the mud — sometimes unable to move.  Mother pigs caged for their whole lives lest they become violent, chickens in caged one on top of another but still producing daily eggs, steer standing in pools of manure, fed corn that causes them stomach pain and sickness, chickens raised in barns so crowded that they cannot move and trample or attack each other, piglets so bored that they bite each other’s tails off in frustration. Essentially, eating those eggs, that pork, that roast chicken, you are eating poison. It is only a matter of time before you or your offspring develop cancers or digestive issues or auto immune illnesses or you name it.

A toxic setting produces toxic products. This should be so obvious to anyone who reflects on production costs: you can never, ever get something good for nothing. But we make ourselves blind, we think only about the dollars we are saving, buying the “sale meat.” We feel in fact virtuous when we save a few dollars. A few cents. We pay many, many dollars for expensive drugs, for expensive surgeries, for vitamins,  for medical care of all kinds to repair the damage when it’s too late — but we don’t make the correlation. Human health = farm animal health. This is not an issue for the wealthy, a shee-shee fruity goofball issue, nor a political attack point.  It is basic science, and basic business, and practical fact. You get out what you put in.

So to you, dear sad ugly funny faced chicken, thanks for opening my eyes to see in the flesh what I had been told was true. Thanks for the eggs you laid for us. Maybe someday the government will stop giving tax dollars away to fatten the pockets of wealthy big corporations, and instead support the small farmers who are doing things right. How can we make better food available to more people? And this is as true for vegetables as it is for meat products – toxic growth processes produce toxic plants. It’s just that vegetables can’t feel pain and misery while waiting for us to figure it out. 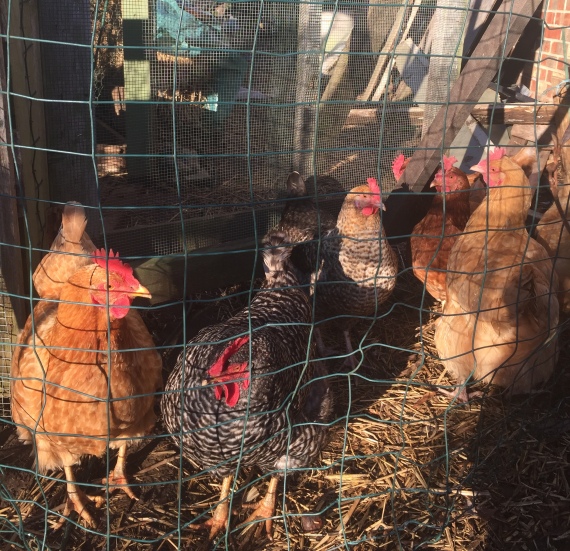 Salad greens picked this December morning – not that big  a deal for a full-time grower, but we aren’t that. Edward and I struggle to fit gardening into our schedules. He is a CEO and I am a writer, when I am not everything else including landlord, which is my contribution to the cash flow.  We are suburban Marylanders with chickens. I love the idea of calling myself an “urban farmer,” but it isn’t really true (only in the most romantic sense – and the fact that I would consider farming romantic is a dead giveaway). We are growers though, and proud of it.

And those greens, small a harvest as they are, are pretty impressive considering the bed isn’t even tarped up in plastic sheeting, but just sitting out. Oh yes, of course I was going to make a mini greenhouse over the top of those plants! On the south side there – it’s the perfect spot! I can just see in my mind’s eye how to do it. But we haven’t made the time. Still, a bountiful parsley and some tiny kale plants grow, in this semi sheltered garden, with the house between them and the north wind. (That reminds me, I should move the fig over on this side…hmmm)  It just shows what’s possible, if you set out to grow some of your own.

Why would I? you ask. Are you nuts?

Yes I am generally considered to be nuts, but the answer is “It’s yummy.” Our eggs, our peppers, green beans, lettuce – everything grown this way tastes so good. Better than the beautiful, organically grown stuff in my favorite health market. And miles better than the cardboard-y stuff you can get at a big grocery store. There just is no comparison, flavor-wise.

It’s a lifestyle. Edward and I agree that moving soil, planting and growing things, observing how things grow, and getting our life into the rhythm of eating from the garden (that means picking in the morning, not harvesting beans right when you need to be making supper! ack!) is part of us. We love being connected to those earth cycles of growth and decay and regrowth.

Mostly. Let’s be real – there are times when you slave over planting and neglect to prepare the soil as the plant likes it, and watch the blueberry bushes die. Or you plant all the beans and forget to put strings on the bean tower (one of our favorite mistakes) or, worse, you don’t fence the garden and the ever watchful bunny bites through the bean stalk for reasons known only to itself, killing the whole vine. Or you plant a lovely flowering shrub, but forget to water that lovely shrub, and tune back in at the end of August to find a shriveled dead thing in it’s place.  Growing food has joys and sorrows, like anything else.

But the point of this blog is that YOU, the ordinary person, can contribute in a significant way to your food supply without being a hippie  and even if you have no desire to retire to the country and generate your own power or wash your clothes in a stream.  My point is that, in spite of a recurring fantasy about being a farmer, I LOVE suburban life. I love going to the movies, and theater, and having access to the metro (when it’s working).

Not my life… Photo from Nourishing Days, by Shannon Stronger

I recently got a posting from the blog of Shannon Stronger a Mennonite farmer (check it out Nourishing Days). Now I love reading this lady. She is charming, and inspiring, and honest, loves to ferment foods and has messy kitchen. What could be better? But I could let her passion overwhelm me. I could never keep up with her gardens, or her canning. And I believe that many “ordinary American suburbanites” think that this is what growing your own has to look like – either this, or Martha Stewart the glamour goddess of domestic engineering!  And that just isn’t true. You don’t have to be a totally put together god-dess nor a totally off the grid and self-sustaining to GROW YOUR OWN guru.

It is possible that “you do you” and you do growing food – at least if that firre is in your belly. Of course ya gotta wanna. But you don’t gotta be a goddess, of any description.

Let me add that I admire Martha and Shannon equally.  They both are fighting for the same thing, in the end. They are preserving wonderful knowledge that parents and grandparents used to teach and now mostly no longer know how to teach. I do not resent that. I love what they do. I am grateful. And I am no goddess – just lucky enough to still have some parsley on the south side of my house.

The fall lettuce and spinach look great – only we wish we

ld have planted more.  The carrots might grow big enough before the ground gets hard – I plan to help hold the heat with a very thick layer of straw (an idea I took from an old Ruth Stout article in Organic Gardening magazine).  The fall planting of broccoli and cabbage are hesitating – will they subside into food for caterpillars? or grow gorgeous green heads?

Things are slowing down.  Except the caterpillars, apparently. Time to go and pull some of those off, and throw to the chickens.  Mulch heavily with straw, water them — and wait and see. 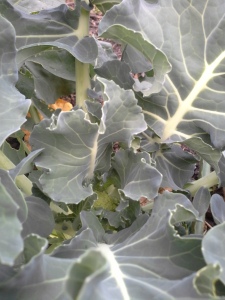